TUCSON, Ariz. – No one is safe from cancer, regardless of their gender, ethnicity or income. Here in Arizona, Latinos account for nearly a third of the population — and, overall, have a lower risk for most cancers. Stomach, liver and cervical cancers, however, are more likely to strike Latinos, despite being rare in the general population. This discrepancy is referred to as a health disparity.

Luckily, cancer mortality risk can be reduced by early detection through regular screening.

“You can cure most cancers if they are diagnosed in a very early stage,” says Jorge Gomez, MD, PhD, of the UA Mel & Enid Zuckerman College of Public Health’s Center for Elimination of Border Health Disparities and the UA Cancer Center’s assistant director for cancer outreach.

Unfortunately, according to the American Cancer Society, Hispanics in the United States are less likely to be screened for cancer, and are around twice as likely to be diagnosed with cancer before turning 50 — making them especially vulnerable to cancers that aren’t diagnosed until a later stage.

And when cancer is detected late, according to Dr. Gomez, “the treatment is less efficacious. More people die unnecessarily. We need to increase the frequency of screening for those cancers where we offer screening, and increase awareness of prevention and early detection strategies.”

While most people agree on the importance of prevention and screening, many obstacles can stand between a person and health care.

“It’s necessary to study those barriers and to find out what is happening,” says Oscar Beita, MD, MPH, assistant director of the UAHS Hispanic Center of Excellence.

The University of Arizona is engaged in a wide range of projects that will confront these barriers head on, helping to improve health in Arizona’s Latino community and increase diversity and cultural competence within the medical field. The UA Cancer Center has a Cancer Health Disparities Program and is active in community outreach; the UAHS contains the Office of Diversity & Inclusion, which itself houses the Hispanic Center of Excellence; and the UA College of Public Health recently opened the Center for the Elimination of Border Health Disparities.

According to Antonio Estrada, MSPH, PhD, UA College of Public Health professor and former co-director for the Cancer Health Disparities Program, higher cancer rates are “compounded by a lack of insurance, cultural issues, economic issues and geographic issues — and then just not a whole lot of outreach to the Latino community, especially here in Arizona.”

By engaging in more community outreach, the University of Arizona is working to change that — making health care more accessible to the population.

“One of the biggest problems affecting the Latino community is lack of insurance,” said Rene Lozano, UA Cancer Center outreach coordinator. Here in Arizona, Latinos have the lowest health-care coverage of any racial or ethnic group in the state — 31.6 percent lack any kind of health-care coverage, compared to just 6.9 percent of non-Hispanic whites.

Earlier this month, the Binational Health Fair brought UA educators and health-care providers into the community. “By having insurance navigators at these events, we can help the community enroll in health care and obtain preventive screenings,” says Lozano.

“There is a significant number of people in the state, maybe half a million, who prefer to speak Spanish,” says Dr. Beita. “They need a lot of support in order to communicate with their health-care providers.”

The Hispanic Center of Excellence offers Spanish classes for students going into health-care professions — not just newcomers to the language, but also fluent speakers who need to learn to use the language with patients.

“We have classes, online resources, immersion rotations,” says Dr. Beita. “Students in the Spanish program can be placed in clinics where there are instructors and physicians who speak Spanish, or who are caring for a large Hispanic population.”

The Spanish Department, in collaboration with the Hispanic Center of Excellence, also offers elementary Spanish for health-care professionals. “Those courses introduce Spanish to novice speakers, from the domain of health care, so all the vocabulary that they begin learning is around health-care issues,” says Dr. Beita. 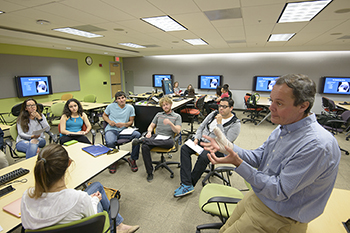 Dr. Beita gives the hypothetical example of a Latino cancer patient who has seen a traditional healer and crossed the border for medications that are restricted in the United States. A culturally competent health-care provider will know scenarios like this are possible.

“If I’m not thinking that that’s a possibility, I’m not going to find that information,” says Dr. Beita. “Maybe the medication I prescribe interacts with something they already are taking. I have to understand where they’re coming from before I can help them.”

Cultural competency can be fostered not just by promoting it within medical school curricula, but also by attracting a more diverse student body into the health professions. Dr. Beita says the Office of Diversity & Inclusion helps build the workforce with programs that will bring more diversity to health-care professions by recruiting Latinos and other students from underrepresented populations. For example, the P-MAP program helps prepare disadvantaged students for medical school.

Looking Toward the Future

With the right research and resources, Arizona can improve the health of its Latino population by studying the problems, developing solutions and implementing them in the community. UA researchers are optimistic.

According to Dr. Gomez, outreach organizers in Arizona may have an advantage. Whereas differences between Latino populations — diverse groups ranging from Argentinians to Mexicans to Dominicans — can be masked when “Hispanics” are lumped together in one group, the Latino population in Arizona is “relatively homogenous.”

“About 90 percent are from Mexico,” mostly from Sonora and Sinaloa, says Dr. Gomez. “That helps us to develop and standardize certain approaches.”

“A lot of people think this is a hard-to-reach population,” says Dr. Estrada, “but with the right tools and the right culturally sensitive, culturally competent outreach, I think you can get the message out.”

“We can reach a very large number of the population here,” says Dr. Gomez. “Yes, we have challenges, but also we have people who are very interested in addressing this issue, helping their own people to live a better life.”